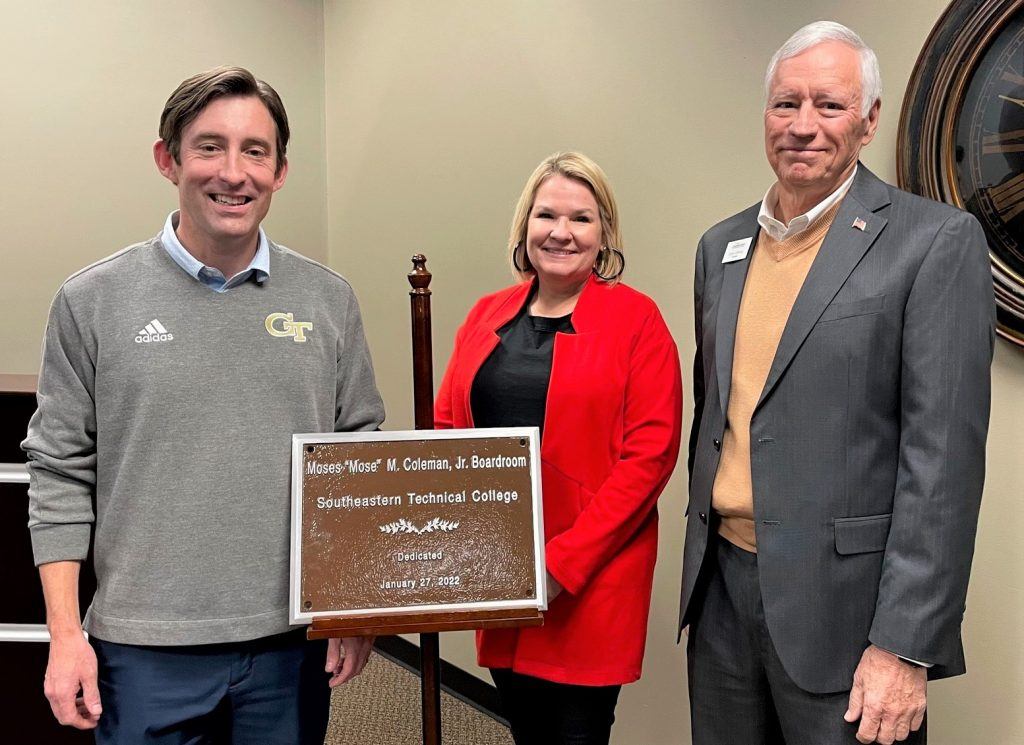 “Mose was a pillar of the community when where we are standing was just dirt, trees, and forest,” STC President Larry Calhoun emphasized. “He was one of the founding fathers of Southeastern Tech and supported it mightily through the years. Back then it was an institute, but now we are a technical college with the same accreditation that Georgia Tech or University of Georgia have. A lot of that goes back to people who invested in the community, like Mose.”

STC’s Foundation Treasurer Dennis Ingley also commented on Coleman‘s impact on the area during his lifetime. “Anyone who got to know him knew that he was dedicated to this area, his family, this community, and education. He loved education.” Ingley continued, “One of the things that stood out for me was his generosity and giving. He would give in all kinds of ways. He often gave his time and resources – things other than money. His dedication to STC was very uncommon. He started when the school started in 1989. He was on the Foundation Board for around 10 years, where he also served as treasurer.”

Ingley told attendees. “He loved to write books and wrote books on just about every cemetery in this part of the state. He was quite an interesting guy when it came to studying and learning, and until the day he died, I don’t think he ever stopped. Mose taught me to take advantage of every minute and second. Every time you get to say something kind or do something good, do it. Don’t waste the time that you are given,” Ingley said. “Mose was a great person. He showed it every day. He gave a lot of money to the college, but I don’t think the money is any comparison to what he really gave. He gave himself to the college and the community, and we certainly appreciate that about him.”

Coleman‘s grandson, Tommy Branch, informed everyone of Coleman‘s story, stating his grandfather was a very humble man and probably never shared a lot about himself. Coleman graduated with an electrical engineering degree from Georgia Tech before beginning to work at Raytheon Corporation as a defense contractor outside of Boston.

When the NASA rocket program was going on in Huntsville, Alabama, Coleman continued to work as a defense contractor but then began working on the program trying to get American aircraft to the moon. He eventually moved to Huntsville to work on the space program at Redstone Arsenal for Brown Engineering and Sperry Rand, where he worked on a telemetry project for Saturn Rockets.

Coleman returned to Vidalia and began working as a young entrepreneur with his father at Coleman Paper Company and at Coleman Sales. Branch shared that Coleman was one of the first people to have a computer in the area, which is described as filling an entire room. This computer was used to create a program for the beer distribution company that Budweiser used throughout that time.

Branch’s grandfather moved his business to what is now the industrial area along Harris Industrial Boulevard in Vidalia and began working with his good friend, Bill Bedingfield. “He had a lot of hobbies and he enjoyed technical things,” Branch said. “Those businesses were his whole life. You could find him working just about until the day he died. His workdays might have started getting a little shorter, but it was always a workday. He would much rather be working, whether it be on his books or searching for Native American cemeteries in the woods. That was just who he was.”

“We are really grateful to you all for recognizing him. He was a really special person, not just because he was my granddad, but because I think everyone that really got to know him would say he was a unique individual that loved education,” said Branch.

Branch concluded, “He had a one-of-a-kind love for others that was very rare. He truly cared for others more than he cared for himself, and that is something today’s world really needs.”

Calhoun commented, “I really think it is appropriate that the Foundation he was such a big part of getting started had the idea to name this boardroom, which is fairly new and larger than the original one, after him, and it is representative of the growth that he contributed and got started.”

The STC Foundation presented a plaque that will be displayed outside of the boardroom and shared an official statement regarding the dedication which reads:
Soon after Mr. Coleman passed away, the Southeastern Technical College Foundation made the recommendation that the boardroom on the Vidalia campus be named in his honor. They felt this was an appropriate way to show appreciation for Mr. Coleman’s dedication and support of STC and technical education. Mr. Coleman was a founding trustee of the former Southeastern Technical Institute, serving for 10 years, after which he served on the STC Board of Directors for three years. We are tremendously grateful for his life and for the generosity he showed us with both his time and financial resources.